Have you ever had one of those moments when someone gives you the most unexpected eye opening complement and  it brings tears to your eyes?

Well that is just what happen when I met Earl P. Williams, Jr.  U.S. Flag Historian

Back Story: In 2017 I wrote a blog called “Meeting Betsy Ross, a Dream Come True” In the story I share my experience seeing Betsy Ross’s home for the first time, I wrote a piece based on the data I was taught as a young girl. After reading my blog, Mr. Williams reached out to revel the truth about our flags history.

This is what he wrote to me. “Dear Ms. Arambula, I just read your passionate story. “Meeting Betsy Ross, a Dream Come True” dated June 15th 2017. Unfortunately, scholars no longer accept the claim that Betsy Ross or George Washington and anything to do with the birth of the Stars and Stripes. The Ross Story is based on faulty Ross family oral history that din not go public until the 1870’s.– a century after the Revolution. In Reality, Mrs. Ross made blue naval flags and narrow, red ship’s pennants for Pennsylvania’s navy during the Revolution. After the war, she and her family business made U.S. Flags for 50 years. Its true that she cut five-pointed stars with one snip of the scissors to speed the production. (See Wikipedia article on Betsy Ross) General Washington had nothing to do with creating the Stars and Stripes because it was created under the auspices of the Continental  Marine  (Maritime) Committee and the U.S. Navy. (See Wikipedia article on Francis Hopkinson)

Upon reading this I made a personal phone call to thank him and let him know how touched I was to take the time to care. He explained that this was something he was very passionate about and had been researching the history about flags for over 40 years.

I then shared with him how passionate I am about flags and shared my prized possession,  Flag Heart Art video: What the World Needs Now

After watching the video we had a long phone conversation and then he wrote me this email.

“Dear Debbie,
I wasn’t expecting a reply to my earlier email; it was just an FYI. But it was good to hear from you, and thanks for sending the touching You Tube video about the concept behind the “What the World Needs Now” flag painting.

I am a paleovexillologist of the U.S. flag. (Vexillology is the study of flags.) I have studied, researched, and written about the genesis of the U.S. flag since the 1980s. Paleovexillology is a form of forensics. How did our Flag come to be? What’s true? What’s myth?
I have seen many portrayals of the Stars and Stripes, some of which were quite artistic, especially the renditions from 18th and 19th Centuries. Flag makers during the American Revolution used two crossed triangles to make a 6-pointed star or two crossed squares to make 8-pointed stars. And to add to the variety, the law was silent on the stars’ arrangement in the flags’ upper-left-hand corner (canton). Most were arranged in rows, a few in columns. Some were arranged in the shape of boxes, with one star in the center. Some were arranged in the shape of diamonds or Xs. Some were in ovals; a small number were in the shape of a ring (for eternity) or a ring with a star in the center. Some were in the shape of a big star. Betsy Ross contributed the 5-pointed star to the American flag as a technique to save material and labor. She used only one piece of cloth to make a star.
In the late 20th Century, unofficial “U.S. flags” with a peace sign in the canton instead of stars appeared. But your “What the World Needs Now” took the peace message to a higher plane. 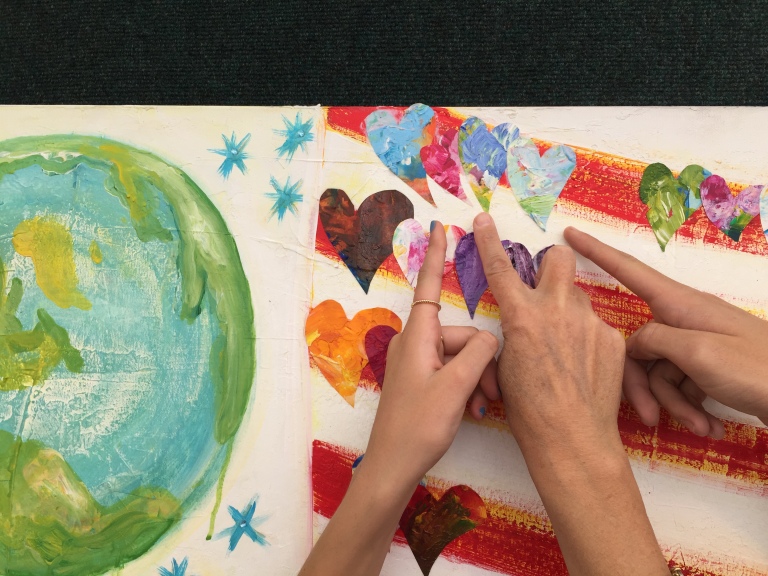 What the World Needs Now By Debbie Arambula

Your flag incorporates the 6-pointed stars of the original Stars and Stripes — as designed by Francis Hopkinson — put them on a white canton (not blue, as in our Flag), and then incorporated the globe in the middle of the cluster of 11 stars that symbolize 9/11. Likewise, the 11 red stripes (for 9/11) incorporate multicolored hearts to symbolize love on the 11 red stripes.

After researching the U.S. flag and the Flag as art for nearly 40 years, I have seen nothing like your flag. It’s unique. It symbolizes us as a people. When Francis Hopkinson designed what became the U.S. flag, he designed it as a utilitarian ensign for the U.S. Navy — not a flag for the people. He also designed an American flag that had 7 white stripes and 6 red stripes, the reverse of his Navy flag. But it was for the U.S. government — not the people. (This flag was hardly used and fell from usage a generation after the Revolution.) People didn’t begin to display our flag until the strife of Civil War.
Debbie, your flag memorializes the tragedy of 9/11; honors those who protect and serve; represents the human race, through the globe; and expresses the power of love through the multicolored hearts. It’s a powerful piece of art. Bravo!

U.S. Flag Historian (Paleovexillologist)” Mr. Earl P. Williams Jr. has dedicated over 40 years of research into correcting the History about our flag. Find his book on Amazon:What You Should Know About the American Flag

Of course upon reading this my heart was overwhelmed with honor, pride and tears of joy. To be so validated by someone of such historical background is beyond words.